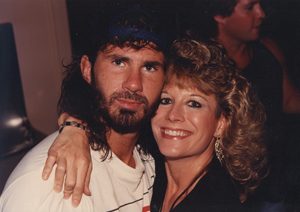 Who knows why Lissa Wales was born to photograph drummers, but she was.  And thank goodness, because whenever I need a photo of even the most obscure drummer, I make one phone call and can expect a killer Lissa Wales shot in my hands early Monday morning.

Born in San Francisco, Lissa Wales was whisked off to Arizona when she was barely one year old.  That’s where she grew up, as the grandchild of a photographer (clearly, she inherited her gift).  A longtime lover of music, Lissa became a college rep for CBS Records, chauffeuring rock icons like Billy Joel and Kenny Loggins back and forth from their hotels, airports and gigs whenever they passed through town.  Between trips she would occasionally take snapshots of her clients.  Predictably, it wasn’t long before the photography bug bit her. 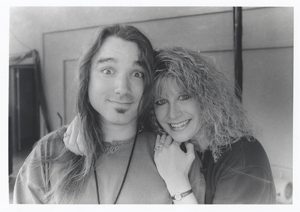 But it wasn’t until 1982 when Lissa began shooting drummers in particular.  Her inspiration came from Jim Zupanic of the Creative Drum Shop in Scottsdale, Arizona, who asked her to shoot some drum clinics in his store.  Next he invited her to attend her first Percussive Arts Society International Convention, where she was hired to shoot the show.  Basicly, she never looked back.  Since then her work has appeared internationally in respected magazines such as Drums & Drumming, DRUM!, Rhythm & drums (Japan) and Slagwerkkrant (Germany).

Her favorite assignments have included shooting the Yamaha Groove Night at the 2000 winter NAMM Show, the Buddy Rich Memorial Scholarship concert at the Wiltern Theatre in Los Angeles in 1988 and Zildjian Days events throughout the country in 1990.  Her catalog is jammed with the top names in the history of drumming – past and present.  Lissa likes to photograph “anybody who really emotes” and cites Louie Bellson, Simon Phillips, Andy Newmark, Gary Husband, Dave Weckl, Steve Gadd and Chad Smith as some of her favorite subjects. 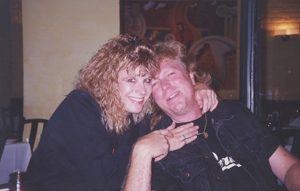 So what’s her secret for taking the perfect drummer photo?  “Just catching their emotion on film”, Lissa explains.  Trying to be in the right spot – that’s the key.”  Almost sounds too simple doesn’t it?  Well, it is, because there is another much more mysterious factor involved with getting the right shot, and that is whether or not the photographer has a good eye.  Lissa Wales has a good eye.

Lissa passed away on Oct 1, 2005 after a courageous battle with leukemia.  She will be missed by all.